Picking Marbles Out Of A Bag

I am disappointed with my trading performance so far this year and have worked hard to determine if there is a problem with my strategies. I have made some small changes but I should be generating better trade performance than I am.

Most of my stock strategies are mean reversion based and generate limit orders (e.g. buy a given stock tomorrow if it decelines by X%). As my trading is not completely automated, I have to manually enter a trade once a signal is produced. Obviously I have to be at my computer to do this and often I am away from my office as I am not a professional trader. Thus I cannot take all the trades that my systems generate. With that in mind, I compared the trades that I have taken versus all the trades that I could have taken.  I sorted the trades into deciles and present them in the chart below. 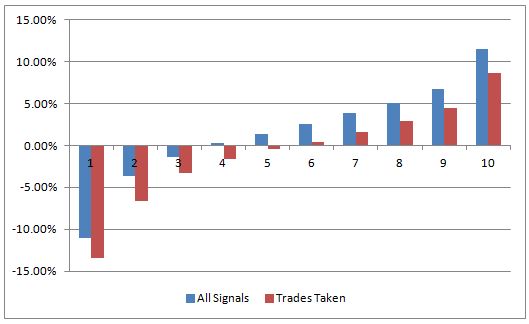 Assume there are 1,000 marbles in a bag and each marble represents a signal from one of my strategies. 67% of those marbles are green (representing positive trades) and 33% are red (representing negative trades). If I reach into the bag and randomly pull out 500 marbles, there is no guarantee that 67% of the marbles will be green. The 500 marbles could have more than 67% green ones, 67% green ones or less than 67% green ones. If I put the 500 marbles back in the bag and repeat the process over and over, I should eventually have an average of 67% green marbles calculated over the number of times I pulled marbles out of the bag.  There is only one way to be guaranteed that I get the same percent of green marbles as there are in the bag with only one try – I would have to take all the marbles. Similarly with my strategies, I would have had to take every trade to get 67% winning trades.

In the short term, trading performance is a matter of skill and luck.  Luck could have worked in my favour and I could have had 75% winning trades for example. So far this year, my luck has not been favourable but I am not worried as I know that if I continue to pull marbles out of a bag, or take trades generated by my strategies as I am able, I will eventually reach the same win rate and average trade performance had I taken all the trades.

If you trade in a similar manner as I do, one of the key lessons here is that you should monitor all trade signals that your systems generate. Your decisions on whether to continue trading any given system have to be based on all the signals generated and not on only the trades you executed.